In a recent report, the Australian Department of Defense states that 85% of the targeted breaches could have been prevented by implementing just 4 controls (http://www.asd.gov.au/infosec/mitigationstrategies.htm).

At least 85% of the targeted cyber intrusions that the Australian Signals Directorate (ASD) responds to could be prevented by following the Top 4 mitigation strategies listed in our Strategies to Mitigate Targeted Cyber Intrusions:

And that is exactly what this book is focused on, with some additional measures, which should help you mitigate up to … I will be bold and say 98% of the attacks you might encounter.

It is essential to properly harden the nodes in your network – servers and endpoints. The stricter the policies on what can be used, how and where – the more difficult would it be to introduce a malicious element and disrupt your operations security.

Establish some ground rules, the first and foremost of which should be performing everyday tasks on any OS as a limited account. This applies to all users but especially and primarily for IT administrators.

Policies should be set to prevent the execution and installation of unknown executables / software when running with a limited account. And when running as an admin, the administrative user should be barred from accessing the Internet on the proxy level.

There should be NO EXCEPTIONS to the above rule, no matter how much riots and complaints you receive – I can confirm from experience that IT Admins can used to working this way and they do used to it – after time, they not only accept it – but if you do your job and explain the reasons properly, they will enforce it upon their non-compliant and rebellious peers.

The reason for this is contradictory, but nevertheless real. The users with admin power are considered knowledgeable and experienced – that is why they got administrative rights in the first place, right? Wrong. Often administrators are overconfident and browse the internet as admins with no clue of the risks in the simple act of browsing. Then some of them download applications ‘to make their life easier’, as a result introducing malicious software into the company. Hence, the need to restrict internet access for administrative accounts and the need for administrators to work as limited users. If they need to download and execute something, they can download it as a limited account and execute as administrator.

Rule number two: no external devices allowed whatsoever, except company-issued ones, encrypted and allowed by Device ID, mapped to a user ID. Connecting a smartphone or tablet to a corporate laptop for file transfer should be impossible.

Code execution from external devices should be forbidden by policy. Copying executable files from an external device to the local drive should be immediately detected, if allowed at all – and an alert should be sent to the IT administrative team if that happens, followed by the creation of a security incident. Disabling AutoPlay/AutoRun should be a no-brainer and supposedly implemented a long time ago.

Rule Number 3: every user’s “My Documents” folder should be located on a network share, if possible. The purpose of this effort is to enable centralized backup (unless you have other solutions in place) and prevent the “Sony Disaster”, in case your organization is attacked by destructive / encrypting malware. If this happens, you should have a backup to quickly restore the encrypted files to their original versions.

Rule Number 4: backup *everything* you can, as often as you can.

Rule Number 5: This one is more of a recommendation – but if you can, build a clone of a standard desktop machine, ready to be logged on to and having auto-configuring mail client, etc – based on the user account logged on. Have that one deployed on Amazon or another cloud vendor – ready to be cloned to as many copies as you need in the event of a disaster. Do the same for critical servers. If your organization is hit by a disaster, you will be able to quickly power on and run from the cloud. Having powered-down copies of virtual machines in the cloud, ready to be cloned and powered on is extremely cheap compared to maintaining a cold, warm or hot site with physical machines. 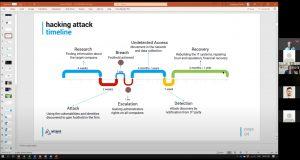